The lomo embuchado (pork loin) has its origin in Aragon (Spain), and is one of the cured meat products that have been protected under the Diputación de Aragón  guarantee mark since 1993 in order to protect the quality of the product.

The preparation of the loin has been carried out in Aragon since ancient times. Originally the pork meat was obtained from the la matanza tradicional (traditional killings), now with the protection of the Diputación de Aragón guarantee mark ensures that the finest quality pork lion continues to be used as before.

The lomo embuchado of Aragon uses only the freshest meat free of the outer fat from castrated male pigs or females outside the estrus period, with salt and other natural spices marinated and then put into a sausage net.  It is then allowed to mature for a maximum period of 60 days. The loin obtains an intense flavour, fine texture and is soft on the palate and is marketed with the seal of food quality. It comes in a ‘candle’ between 50 to 70 cm in length.

For their preparation, the loins are put to cure in salt and sugar for one or two days, then washed and left to air dry for a further two days until they are well drained. After the loin is marinated with a dressing prepared with paprika, garlic, oregano, and olive oil, they are put into elongated casings and hung for healing in a cool, dry environment for at least two to three months.

Its flavour is intense and natural, usually presented as a ‘candle’ or in thin slices cut vertically and vacuum packed, it then needs to be kept in a cool dry place. Its exterior colour is light and inside it has a dark vivid red colour with marble-like appearance, because of the fat that has infiltrated. The loin is consumed raw as it is a cured meat.

Tasting themes: Sliced thin in a crunchy baguette drizzled with a high-quality Spanish olive oil, in pinchos, on a charcuterie board. 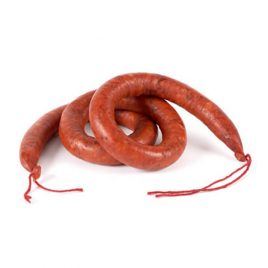 To speak of the origin of the chistorra (txistorra) is to speak of the Navarre region in Spain. This rich sausage has a characteristic reddish colour and smoky paprika flavor and is made from a mixture of craft skills and history. The txistorra popular in a main meal or as an appetizer or snack. It has been a tradition since ancient times pig farming has allowed many families and cities in Spain and its autonomous regions to obtain quality proteins and this is where the origin of chistorra comes from. The txistorra or chistorra comes from the Basque term longaniza. It is a sausage of Basque-Navarrese and Aragonese origin. It is made with fresh minced pork meat, garlic, salt, aromatic herbs such as parsley and a good amount of paprika this gives it it’s characteristic colour and flavour. Traditionally in Spain and as with today’s gourmet products every part of the butchered animal is used. In Guipúzcoa, due to climatic and or economic reasons, the pork slaughter was carried out shortly before the arrival of winter. In some localities like Lodosa in the Basque country the txistorra is usually made with the meat and lung of the pig. In the Aragones and Navarra region of the Pyrenees the txistorra is made only with the pork meat. In Jaca’s Fields they have another variety made from the liver, and other remains of the pig, which is called arbiello, a word in Aragonese that means esophagus, since it is where the ingredients are stuffed. In the province of León, the Chistorra de León is prepared, and is made with greater quantities of beef. Nowadays it is usually sold fresh, but increasingly you can buy it vacuum packed in a spiral shape in any of the Spanish supermarkets. The txistorra has a characteristic flavour is very tasty and high in fat. It is usually eaten fried or roasted and is usually served as a midday dish in Madrid with "broken eggs and potatoes". Tasting themes: Fried with apple cider and served with quality crusty bread, grilled whole in its spiral shape, in pinchos or with t fried broken eggs on top of roasted potatoes. Download our info sheet
Read more 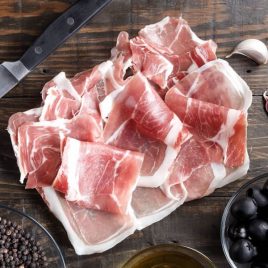 The majority of Serrano Jamones are made from a landrace breed of white pigs or from commercial breeds such as Duroc or Berkshire are not to be confused with the often more expensive jamón ibérico, made from black Iberian pigs. These aged hams were known as a delicacy even in the days of the Roman Empire. The protein is of high quality and after curing for 12-14 months the meat becomes a rich intense red colour. The serrano leg is always bigger than the Ibérico as it always contains less fat due to the different diets of each pig breed. Unlike the Italian prosciutto which is cured cold, the Spanish Jamones (ibérico & serrano) are cured in a specially ventilated room that mimics the conditions of the traditional cellar. Jamón serrano can be used in a charcuterie board, in a bocadillo (crunchy bread roll), salad, stews, croquettes, pasta, pizza just about wherever your culinary imagination can take you. Download our info sheet
Read more 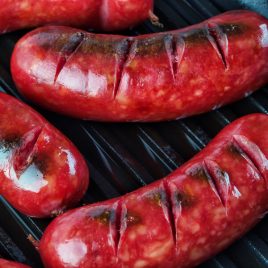 The sausage has been around since ancient Greek and Roman times and in the 12th Century in the Romanesque Calendar of San Isidoro the month of November is called the month of the slaughter of the pigs with the pork being used for the making of chorizo and other cured and dried sausage such as the Chorizo parrillero. There are references in a famous ancient Greek comediographer, Artisphones’ literary works where the main character appeared with a pot full of sausages and with a figure of a man holding a pig for sausage making. The chorizo acquired its characteristic red colour during the 16th Century when the paprika arrived from South America and was introduced into Spanish cuisine. In Spain, a chorizo must have garlic and paprika to be considered authentic since this is what differentiates Spanish chorizo from other sausages. It is cured outdoors or smoked, and its main base is minced pork marinated with paprika giving it its typical red colour and unmistakable full flavour. Our chorizo is made not only from four types of pimentón with a mix of Spanish family secret herbs, it is also made from three different parts of the Linley Valley Pork – the jowl, cheek and shoulder. The pigs raised in Western Australia at Linley Valley Pork are fed on a nutritious diet of Australian grains, such as barley, wheat and lupins. This ensures a high-quality base from which The Iberians Chorizo is produced. It has a diameter of 30-40 millimetres and string form, with a compact and firm consistency, rugged sexy appearance, smooth cut, red colour with an intense balanced aroma with a pleasant texture to the palate, and full lasting flavour, very balanced between fat and lean and includes the spicy variety. In different regions of Spain the chorizo is cooked using a variety of methods – for instance in Galicia they serve the chorizo flamed in aguardiente (a fermented alcoholic herb liquor), in Asturias it is cooked a la sidra (with cider) or simply pan-fried in olive oil or on the BBQ. Download our info sheet
Read more 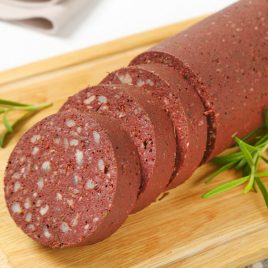 Morcilla (black pudding), a Spanish tradition that makes a fine tapa. Increasingly present in the modern kitchen for its exquisite taste and its versatility: in puff pastry, pies, scrambled, grilled or pan fried ... Always delicious! There are two types Malagueña and Burgos the first being made with onion and the second with rice. With the Malagueña only the very large variety was selected, with its strong robust flavour and firm protective skin. Planted in the spring and pampered in the family garden, it was harvested in autumn with great yields, hanging in aerated branches in a dry place for its conservation. The Burgos supporting ingredient rice which is added lightly cooked at low temperature which infuses the spices into the grain. This morcilla can be eaten "raw" (since it is already cooked), or fried, roasted, or smoked. It combines very well in rolls, pintxos or slow cooked with legumes (beans, lentils or chickpeas), making a stew not only a gastronomic delight but also a dish with great nutritional value. Download our info sheet
Read more
The Iberians