The sausage has been around since ancient Greek and Roman times and in the 12th Century in the Romanesque Calendar of San Isidoro the month of November is called the month of the slaughter of the pigs with the pork being used for the making of chorizo and other cured and dried sausage such as the Chorizo parrillero. There are references in a famous ancient Greek comediographer, Artisphones’ literary works where the main character appeared with a pot full of sausages and with a figure of a man holding a pig for sausage making.

The chorizo acquired its characteristic red colour during the 16th Century when the paprika arrived from South America and was introduced into Spanish cuisine. In Spain, a chorizo must have garlic and paprika to be considered authentic since this is what differentiates Spanish chorizo from other sausages. It is cured outdoors or smoked, and its main base is minced pork marinated with paprika giving it its typical red colour and unmistakable full flavour.

Our chorizo is made not only from four types of pimentón with a mix of Spanish family secret herbs, it is also made from three different parts of the Linley Valley Pork – the jowl, cheek and shoulder. The pigs raised in Western Australia at Linley Valley Pork are fed on a nutritious diet of Australian grains, such as barley, wheat and lupins. This ensures a high-quality base from which The Iberians Chorizo is produced.

It has a diameter of 30-40 millimetres and string form, with a compact and firm consistency, rugged sexy appearance, smooth cut, red colour with an intense balanced aroma with a pleasant texture to the palate, and full lasting flavour, very balanced between fat and lean and includes the spicy variety.

In different regions of Spain the chorizo is cooked using a variety of methods – for instance in Galicia they serve the chorizo flamed in aguardiente (a fermented alcoholic herb liquor), in Asturias it is cooked a la sidra (with cider) or simply pan-fried in olive oil or on the BBQ. 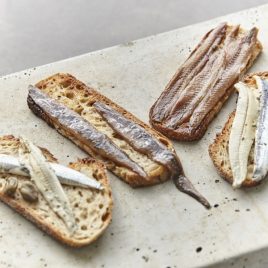 The boquerons (marinated anchovies) NASSARI are elaborated from the best prime material,obtained from our seas. Boquerons NASSARI is a fish that has been fished in the Mediterranean Sea, North Atlantic and the Cantabrian sea. They are produced by firstly being cleaned in abundant water, then marinated with wine vinegar and salt, this is how they obtain their characteristic flavour, colour and texture. Product cleaned one by one, by hand. The anchovy (Engraulis Encrasicolus) is obtained from the larger of the species, through a process inherited from the ancient Romans, salting. A gastronomic product of high quality, valued for it's characteristic aroma, obtained from a long process of salting. Throughout the salting process, the fish's own blood and a long process of curing, gives it it's own characteristic aroma. The anchovy is carefully filleted, and each fillet checked one by one to guarantee the quality of the product.
Read more 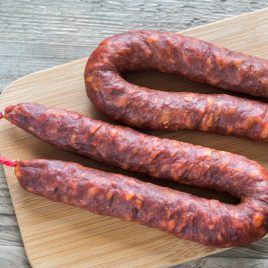 In 15th Century Spain livestock was raised outside the cities and the animals killed in abbatoirs, the meat then sold to the butchers. But with the pigs it was different, the pig was still being raised in the villages, it was killed in the streets and the sausage was made by the family. This custom is something that still persists in some towns of Spain, el matadero (the slaughter of the pig). It is likely that chorizo was the first cured product that due to its age and extension gained the attention of the Spanish Royal Academy of Language whom defined in the Dictionary of Authorities in 1726 as "short piece of tripe, full of meat, regularly of pork, minced and marinated, which is normally cured by smoke ". In such time the paprika was not yet common spice to the Spanish pork-butchery. The Spanish chorizo is red due to the paprika with the ingredient arriving in Spain in the 16th Century, from the Americas. Before the paprika arrived on the Iberian Peninsula sausages were whitish or black if they were made with blood and sausage recipes can be found in ‘women’s manuals’ dating back to the 16th Century. The chorizo picante (spicy chorizo) is made with lean and fat pork, smoked and cured, traditionally made in the winter months taking advantage of the cold and frost these conditions giving it the characteristic dark red colour and aroma. There are three types of chorizo sartar, cular and vela. Tasting themes: sliced thin for sandwiches or tapas, fried with olive oil, cooked in stews with grains (lentils, chickpeas, white beans) plus a host of gastronomic combinations very typical of Castillian lands. Download our info sheet
Read more 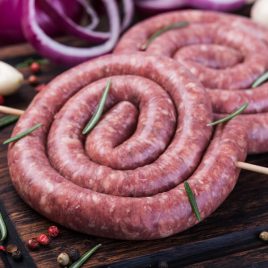 Butifarra is a product of Catalan origin, it is a pork sausauge that is seasoned with spices of which there mainly two types, the fresh butifarra and the dried sausage. The Catalan butifarra’s origin begins in the 14th century and its name is derived from the Latin root of Botillo Berciano or Galician butiello. Over time a great variety of butifarra has emerged not only from Catalonia, this delicious sausage has spread through the Balearic Islands, Aragon, Valencia and as far as the Murcia region. Unlike other sausages it contains no fat only lean meat from the tip of the loin and sometimes other cuts of lean pork. At most, a bit of chopped bacon is added as a condiment, but it never reaches large proportions (for example, half) as in other sausages from other countries. Sometimes the minced meat can be cooked lightly in the oven or can be seasoned with, for example, chopped mushrooms before being stuffed. The sausage mixture is kneaded manually and then stuffed into thick pork casings 32-36mm. Then, the intestine is marked at each span with thick cotton thread and separated into different sausages, uncut, rolling each one with the casing. The sausage is served with mongetes (white beans) it is the traditional most popular way of consuming this product, typically also in a bocadillo (bread roll) with manchego cheese or grilled with mustard or aioli. But beyond these preparations, the Catalan culinary culture has always claimed the prominence of the butifarra in a diverse and abundant cookbook. Butifarra with its delicate aniseed and peppery flavours this sausage will harmonize with fleshy, light, dry to medium red wines. Download our info sheet
Read more 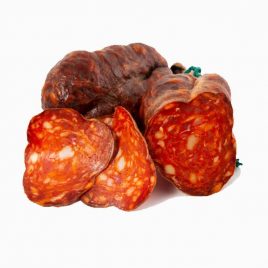 Morcón is a type of chorizo, eaten in much the same way. The difference is the meat with which it is made, which is usually lean without much fat content, and that the meat is stuffed into a section of pork large intestine. The marinade used to flavor the chorizo is mainly composed of paprika, garlic, and salt. Due to the thickness of the sausage, the maturity period is quite long. It is typical of some regions in Spain such as Andalucía, Salamanca, and Extremadura.
Read more
The Iberians